Is Arthoscopic Hip Surgery for FAI better than physical therapy?

Other studies have shown that physical therapy and surgery for FAI are equally disappointing. So like any study, sometimes you have to lift the hood and look at the fine print to see what's really going on.

The researchers turned these weak results into a pro-surgery conclusion instead of looking critically at how to help people with hip pain in a safe and non-invasive manner. Proponents of surgery will cite this study as evidence that surgery is the gold standard for treating FAI. It's happening already. 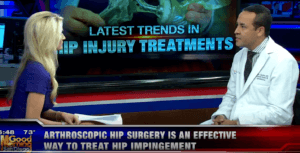 This surgeon is already doing PR touting the benefits of
surgery over a muscular approach to hip pain.

Let's take a deeper look at this study on arthroscopic hip surgery for FAI. In this blog I'm going to explain why the conclusions of this study were misleading and what the study actually teaches us about surgery and physical therapy for FAI.

PHT included four separate components. First, researchers conducted an assessment of pain, function, and range of hip motion. Then, researchers educated patients on various exercises and treatment objectives. Then they taught an exercise program in the clinic and asked patients to  repeat the exercises at home. Finally, some participants received help with pain relief - which included steroid injections.

But there’s a huge problem with PHT in this FAI study, and it's a problem that stacked the odds against conservative care for FAI hip pain.

The exercises that are included in the PHT program  do not follow any logical, progressive order. And they don't focus on hip muscles in a targeted, precise way.

Take a look at the hip routine yourself. There is no direction on how these exercises should be administered to patients. The protocol does not identify progressions once a patient becomes stronger in a certain position or in a certain muscle. That's not even the worst of the problems with this group of exercises!

And as far as FAI goes, many will even tell you there's ZERO hope for getting rid of hip pain besides surgery. This demonstrates a lack of understanding and experience with FAI hip pain.

Bill's story below is just one of many examples of physical therapists having no clue what to do to help someone with hip pain and the FAI diagnosis.

PHT should spell things out in a logical, progressive, precise fashion. But it doesn't:

Take a look at the second exercise in the protocol, for example. It's lying down, sucking in your belly button, and breathing. Practicing breathing and proper abdominal engagement can be helpful if you have hip pain. We've seen that with our clients. However, this exercise actually trains improper abdominal engagement. And it provides zero details on what specifically the person should be feeling, focusing on, etc. A little note mentions that the exercise can be progressed for the patient, but it provides no details on how one might progress it or what metrics one might use.

Chance of a person with hip pain getting a great result with this exercise? Close to zero.

What about the other exercises? Surely there must be some that are useful?

They're almost all inadequate hip exercises.

The first exercise in the program is almost too silly to dissect, but let's do it briefly. The exercise is to sit on a yoga ball and alternate lifting a foot to improve balance.

What's the problem here? Asking someone who has hip pain to sit on a ball kills their butt muscles. And people with hip pain usually need help building their butt muscles. The rest of the exercise can have a minor strengthening effect for the hip flexors, quads, and lateral abdominals. But none of this is targeted in a way that restores hip control and range of motion. If anything, it's highly likely the patient would learn to recruit their quads to balance, potentially exacerbating hip problems.

Someone with hip pain and the FAI diagnosis needs to improve the muscle strength, flexibility, and control around the hip joint. These first two exercises are already a waste of time. ​​

There are only 24 exercises to choose from in this protocol, and only 3 or 4 actually engage the hip muscles in a very direct and targeted way. This renders the PHT protocol severely flawed, lending itself little chance of excellent long term results for anyone with hip pain.

The important question here is whether either of the groups got an effective treatment for FAI.  Based on the results of the study, it is clear that they did not.

These factors include (1) symptoms and functional limitations, (2) sports and recreational activities, (3) job-related concerns and (4) social, emotional and lifestyle concerns.[2]​  A year after treatment, participants took the iHot-33 test. They marked their answers on a Visual Analog Scale (non-numbered scale) ranging from 'extremely difficult' to 'no problems at all.' The mean of each group was then calculated and compared.

How much weight can we give to these findings? The millimeters of difference matter. And those millimeters are highly subjective and variable from person to person, day to day.

As someone with chronic hip pain, you know how variable your pain levels can be each day - not to mention how variable they can be every hour.

How does someone who received hip surgery answer questions about hip discomfort compared to someone who performed exercises for a few months? Can’t there be some psychological influence here? Take a look at more examples of questions that appear on the test to decide for yourself.  You'll find that many of them are vague, abstract, and difficult to answer on a linear scale. By the end, you'd start marking randomly to just get through the questionnaire!

The iHot-33 is a very questionable survey with difficult-to-interpret results.

But even if we take them at face value, the difference between arthroscopic surgery for FAI and conservative treatment with a flawed hip physical therapy protocol should make everyone pause.

The iHOT-33 consists of 100 total points. A score of 100 means no pain and perfect function, and lower scores indicate pain and poor function. The study explained that the minimum clinical important difference is 6.1 points. This means that a difference of only 6.1 points between the two groups would make one method better than the other.

With this data, the researchers concluded that surgery is more effective than conservative care. Technically, this is correct but by a very small margin. The difference was a mere .7 and 2.1 points higher than the minimal significant threshold.

While it is technically accurate to say that surgery beat physical therapy for treating FAI in this study, the results are hardly promising for surgery.

The Improvements in Hip Pain from Ineffective Physical Therapy was Surprising

A 14-point increase for the non-surgical group is not too shabby, especially since we know the exercise routine provided was not even good.

When it comes to FAI (and all kinds of hip pain), it is important to address the particular movement dysfunctions at issue for the individual. Neither arthroscopic surgery nor this physical therapy protocol accomplished this.

The physical therapy provided in this study could not have addressed each study participant's individual movement dysfunctions given the gaping holes in the PHT framework. But the non-surgical treatment group still surprisingly made progress based on the iHot-33 results.

What if the study offered conservative treatment that focused on each individual’s particular movement function? What if the personalized hip therapy was actually targeted at the hip muscles in a logical and progressive way?

The results would be way different.

The study itself acknowledges that the results of the study might be due to the placebo effect. Orthopedic surgery is well-known for having a very strong placebo effect. It’s covered in articles and research studies all over the place (here’s one example and another here).

The results from surgery may also be due to the effect on the muscles in the area. The last time you had a vaccination injected into your shoulder muscles, do you remember the result? The muscle was sore and probably unable to move in the same way for at least a week.

A simple shot has noticeable effects on joint motion and available range of motion. Cutting in and around a joint most definitely has effects on the way muscles around the hip joint work too. For some, this could result in improvement. For many, this results in no improvement (and possibly making things worse). This podcast episode covers Why Hip Surgery Works.

In addition, each study participant that had hip surgery also received post-surgery rehabilitation. It is possible that the rehabilitation - and not the surgery - was the driving factor behind the slightly higher iHot-33 scores. This phenomenon has been demonstrated with shoulder surgeries for shoulder impingement in the past.

However, to test it and prove it, you’d have to run another study: two groups get surgery, one group gets rehabilitation and the other doesn’t. And then you would have to compare to a third group that gets only rehab (with something hopefully better than PHT)...That's a complicated and expensive study to run, so it probably will not happen for another decade at least.

When comparing arthroscopic hip surgery for FAI versus physical therapy and injections, the differences are minimal in this study. The improvement scores were barely different. And that's with a badly flawed conservative treatment protocol for hip impingement.

Consider this: If I told you your hip function would go from a 4 to a 6 (out of 10) after surgery, would you do it? It's extremely expensive, invasive, and carries risks of complications.

What if I told you that you could go from a 4 to a 5.5 with perfunctory physical therapy? PHT, a cookie cutter program with limited options and a shockingly simplistic view of hip movements can still provide some benefit -- only marginally worse than surgery.

Both of these options do not seem optimal. Neither of these methods are effective at treating chronic hip pain.

What if I told you that you could go from a 4 to a 9, but it would take twelve months? Or even two years? Maybe five years? The process would require effort, time, attention, and frustration. It would require you to rethink many things about your body and your life.

What choice would you make?

To resolve chronic hip pain, we must improve our own individualized movement dysfunctions. For some, this may be due to poor pelvic stability. For others it may be from limited external rotation in flexion or extension. Or limited internal rotation. Or poor hip flexor flexibility or strength. Or adductor weakness. Or extremely atrophied glutes. Or hamstrings that have locked up and frozen into short positions over decades.

There are countless possibilities and combinations.

The participants in this study did not receive a detailed assessment of their movement dysfunction. They got an over-simplified protocol that failed to even scratch the surface of hip mobility issues. And that's a huge problem with what passes for physical therapy for FAI.

The key is to figure out what your specific movement dysfunction is and fix it. This is the route to pain-free hips and it is completely under your control