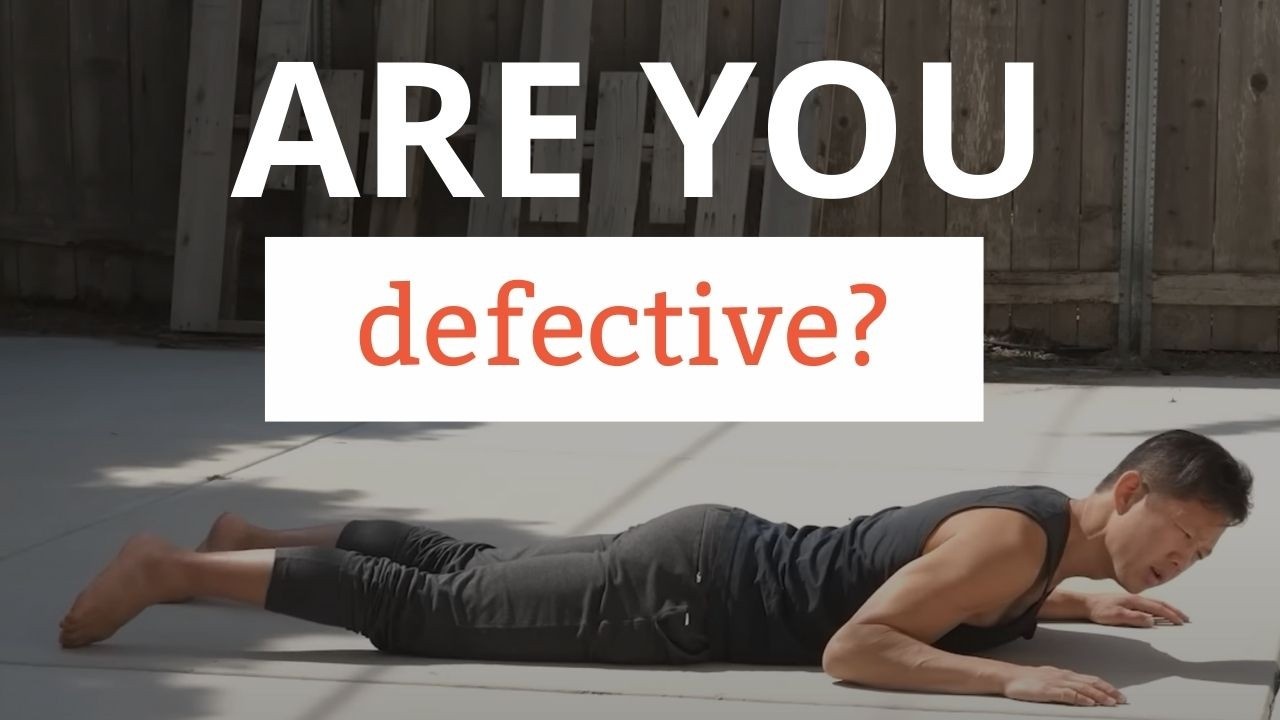 Before you buy into conventional medical advice that suggests you sit still or get surgery to deal with joint pain, try functional training. You might find you have the power to touch your toes, do that squat, or even stand on your hands all on your own, and without pain.

What is the Physically Feeble Fallacy?

Have you ever been told you can’t do something by someone who couldn’t do that thing themselves? Maybe a friend who isn’t physically fit has told you you can’t run a marathon without hurting yourself. Or an inflexible family member has said you’ll never be able to do a handstand. Often, that friend or family member has a list of reasons why you can’t achieve your goal, and most of the things on that list have to do with what they have observed in themselves and others.

I call this the physically feeble fallacy.

1) “I cannot do this, therefore others cannot or should not.”

2) “I observe many cannot do this (or struggle to do it), therefore we cannot or should not.”

The power of this fallacy is amplified by authority or perceived expertise. For example, doctors, surgeons, and physical therapists are common offenders, often telling people to avoid perfectly healthy human movements because they are “dangerous” or “unhealthy.” Weightlifting bros are also common offenders. Their muscle mass gives them the appearance of expertise in all things related to the body, but they may not understand functional movement and training.

See also: How Shifting Your Perspective on Chronic Pain Can Help You Heal

Examples of the Physically Feeble Fallacy

Here are a few more ways you might experience what I’m talking about.

Example 1: You Can’t Touch Your Toes

A doctor who is unable to touch his toes tells you that it is unhealthy and dangerous to attempt to touch your toes. He may also claim that genetics prevents him from touching his toes.

A burly man who does heavy weightlifting cannot do a deep bodyweight squat (Asian Squat). He insists that this is due to factors beyond his control: bone shapes, genetics, height, weight, or the fact that he is not Asian. He explains that anyone who cannot do the deep squat is limited by all the aforementioned factors.

He is blind to the possibility that with proper training for a long enough period he might be able to achieve this movement. He is blind to the fact that all of his training to date has formed a big muscular body that simply hasn’t learned how to control the full range of motion required in adeep Asian squat. It is easier, after all, to simply give up and blame external factors.

See also: Why You Can't Asian Squat (And the Benefits You're Missing)

A woman who has never learned how to lift weights of any kind hurts herself attempting to lift weights. Ten years later, she tells anyone who will listen that weightlifting is dangerous and not something anyone should pursue due to the high risk of injury.

She complains that her hips and shoulders ache on a daily basis (from that weightlifting session 10 years ago), even though she spends all her time stretching and getting massages. She is not open to the idea that her aches and pains may be coming from atrophy and lack of usage, and continues to seek out the “perfect” massage that will fix all her problems.

Example 4: You Need Surgery to Fix Your Joint Pain

A woman who had hip surgery to fix her hip pain unfortunately still has hip pain. Her surgeon told her she must limit her activities for the rest of her life because her hip is “so bad.”

She tells you that if you have hip pain, you should also be quick to get hip surgery to fix it. Her surgeon had told her, after all, that if they had operated on her sooner, her hip would have been in better shape and easier to “fix.” She is slated for another hip surgery to try to fix her hip pain again.

Since this woman has been infected with the idea that surgery can fix her hip pain, she sees no other possible solution. Because of the surgeon’s theoretical construct, any attempt to address the muscles around her hip is considered pointless or, even worse, dangerous. This not only abdicates her of all responsibility for her own suffering, but also places all hope of recovery in the hands of an external source (the surgeon).

The surgeon’s authority and the woman’s experience now combine to create the appearance of expertise—that whatever advice this woman gives must be valid, because of what she has been through and heard from her doctor.

Unfortunately, the larger lesson may get lost if you listen only to the words of the poor woman still experiencing hip pain. The larger lesson is, sadly, that the surgery didn’t work, and there is likely something terribly wrong with her doctor’s underlying theory (and not with her body).

Example 5: Your Arthritis is the Problem

A doctor who is too weak to lift a 10-pound box safely tells you that the only safe way to lift boxes is to bend your knees. This, he says, prevents back injury. When you attempt to use this method, you hurt your knees.

When presented with this conundrum, the doctor offers: “That’s because you have old arthritic knees. It happens to all of us.”

This doctor is likely physically feeble and personally believes there is no alternative to being feeble. Though never explicitly stated, all his advice and strategies revolve around the fundamental belief that weakness is a normal state and that nothing can change that. The only thing you can do is avoid activities that will bring weakness to light.

Unfortunately, this is a self-fulfilling prophecy. The more you avoid activities that challenge your muscles, the weaker you will get, and the more you feel you need to avoid challenging activities.

See also: Do This Exercise for Arthritis Knee Pain + The Truth About Osteoarthritis and Knee Pain

Why So Many People Buy Into the Physically Feeble Fallacy

The Physically Feeble Fallacy is insidious because so many people with perceived expertise and authority buy into it.

In addition, the theories associated with the Physically Feeble Fallacy almost invariably place blame for your situation on something beyond your control. This makes these theories seductive and easy to believe.

It’s important to remember that doctors enter medical training in their twenties, after years of dedicated academic study. This process and their ensuing medical education do not make them experts in human movement.

To the contrary, modern medical school training often devotes less than two weeks to human anatomy and movement. In addition, young impressionable medical students lack the life experience, free time, and motivation to adequately and judiciously weigh every alleged truth they are taught during their rigorous and challenging medical school years. This makes it very easy for medical myths based on the Physically Feeble Fallacy to propagate.

See also: RIIPS: Why Rest, Ice, Injections, Pills, and Surgery Shouldn’t be Your Only Options

How to Turn the Tables on the Physically Feeble Fallacy

The best antidote to the Physically Feeble Fallacy is twofold.

For more on this topic, read ATM Theory: Your Joint Pain May Actually be Muscle Pain